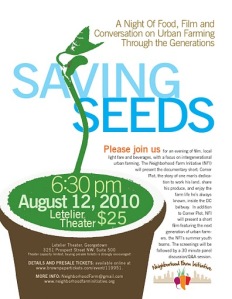 The demand for fresh, local food has put a premium on community garden space in all corners of the District.

Young people are reconnecting with their food sources, urban planners are preaching the gospel of green space and families are eager to prepare dinner with organic produce they’ve nurtured from seed.

But it takes more than dirt and desire to make a garden grow.

Cultivating that perfect heirloom tomato or harvesting a bumper crop of crisp greens requires one key ingredient: knowledge. In 2008, the Neighborhood Farm Initiative sprouted to fill that void for DC growers.

And NFI is wise beyond its years. The community garden movement isn’t a new phenomenon, Whitehurst points out. The current trend is just the latest page in a much longer history — one that started with Victory Gardens after World War II.

“While recent initiatives have brought more media attention to people growing their own food in Washington DC right now, several dozen community gardens have existed here since the mid-1970s,” Whitehurst says. “We work alongside several community gardeners who have been cultivating their plots since before we were born, and we recognize that people in our generation didn’t invent the idea of eating homegrown food.”

So it’s fitting that NFI’s fundraiser next week bridges the gap between generations. 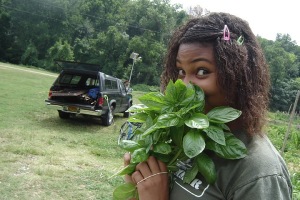 On Thursday, NFI hosts Saving Seeds: A Night of Food, Film and Conversation on Urban Gardening Through the Generations. The $25 ticket price — which benefits the nonprofit — includes local, seasonal hors d’oeuvres, an open wine bar, and a cinematic double-header.

The first film screening, Corner Plot, is an intimate and heart-warming window into the life of 89-year-old Charlie Koiner, who’s been gardening his one-acre plot inside the Beltway for decades. The second movie short follows Teen Green, a summer program NFI launched in 2010 to educate local youth about urban farming, from seed to sale.

“When we first saw Corner Plot, we were struck by the difference between Charlie Koiner’s way of life and the lifestyles of the teens we work with every day,” Whitehurst says. “But as we thought more about it, we began to see some powerful connections, and we wanted to give others the opportunity to make their own.”

Those organic connections will be fleshed out after the films, during a Q&A including Corner Plot filmmaker Ian Cook, Koiner’s daughter and several teens from NFI’s summer program.

“Education is at the core of our mission,” Whitehurst says. “We want to teach people to grow vegetables in the city, and we want to connect people to serve as resources to each other.”